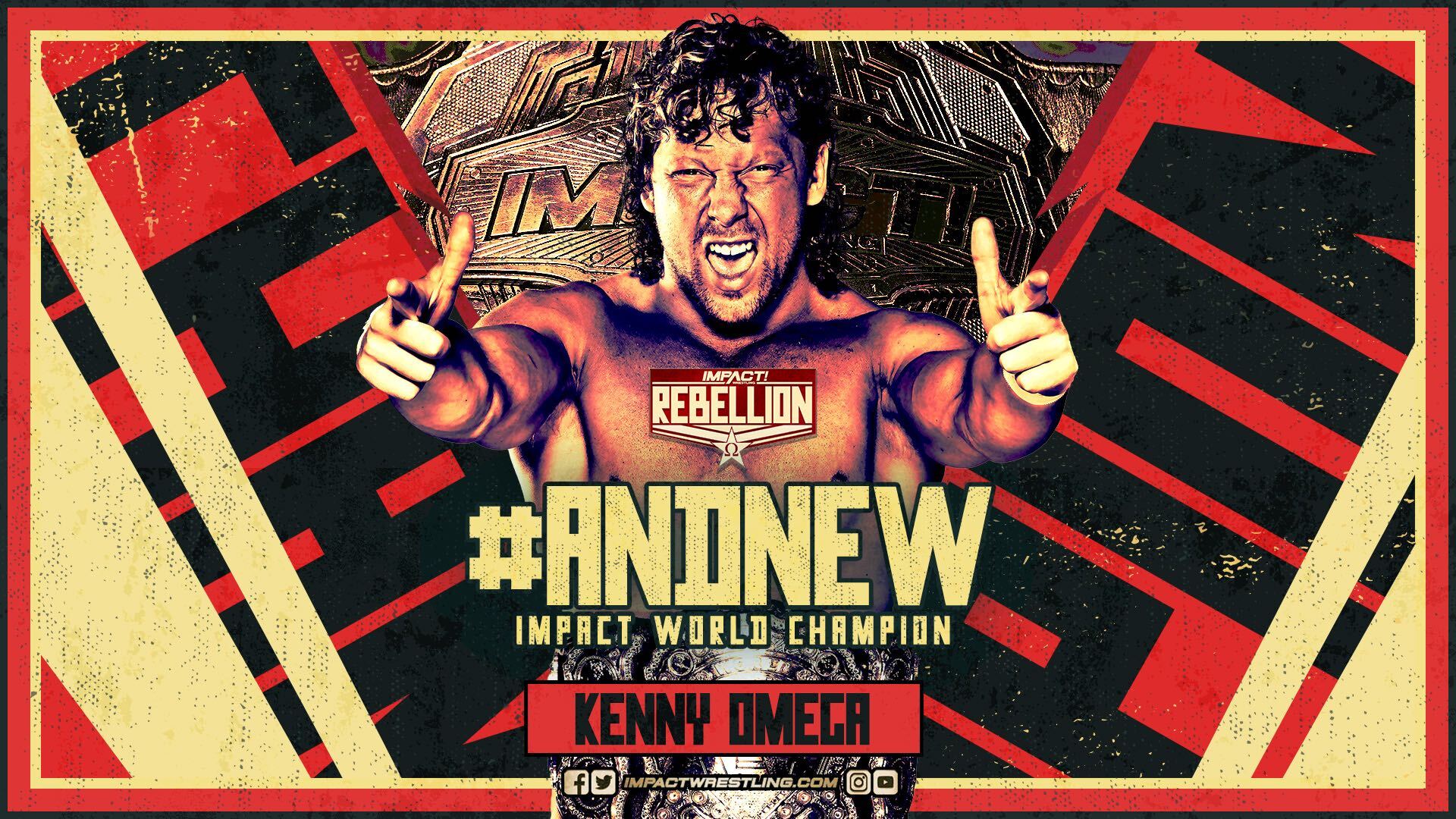 Order the Rebellion replay on Pay-Per-View!

A historic first, a battle between two champions, a war between two competing worlds. It’s time for Rebellion LIVE on Pay-Per-View!

Ace takes out both of his opponents with a Fosbury Flop to the floor. Ace is about to give TJP a papercut with his laminated playing card but referee Brian Hebner stops him. TJP sends Alexander into the corner with a Hurricanrana. TJP delivers a big running boot to Ace. Alexander picks both men off the top rope with a thunderous double Superplex. TJP hits the Mamba Splash on TJP but Alexander prevents him from going for the pin. TJP counters the Ankle Lock into a kneebar submission. Ace hits Alexander with The Fold but TJP breaks the pin before the three count. Fulton trips up TJP from ringside. Alexander capitalizes with the Divine Intervention on TJP for a near fall. Alexander hits another Divine Intervention, this time on Ace, to win the match and become the new X-Division Champion!

Eric Young is seen speaking to someone and says that they will make their mark – tonight.

W Morrissey makes his shocking debut and joins Violent By Design for this 8-man tag team match. Morrissey is aggressive in the early going as he kicks Storm off the top rope, then knocks his other three opponents off the apron. Doering explodes into Storm with a big running crossbody. VBD is in control until Storm creates separation with a neckbreaker to Rhino. Willie quickens the pace as he hits Deaner with a sit-down powerbomb for two. Eddie dives through the ropes and collides with Doering and Morrissey on the outside. The match erupts into total chaos. Sabin takes out everyone with a Superplex to Deaner, crashing into everyone on the floor. Willie hits the Stunner on Doering but he quickly retreats. Morrissey hits a massive boot on Willie, then puts him away with the East River Crossing for three.

After the match, Morrissey continues the beatdown as he pummels Willie with repeated strikes.

Before the bell rings, Cardona offers his former best friend a handshake but Myers flips him off. The fight spills to the outside where Myers drives Cardona back-first into the steel guardrail. Myers begins to work on the neck of his opponent. Cardona delivers a thumb to the eye, followed by a top rope dropkick. Cardona connects with Radio Silence on the exposed ramp. Myers hits a spear on the outside, followed by a top rope elbow drop for two. Cardona almost puts Myers away with an Unprettier. Cardona injures his leg but Myers shows no remorse and takes him out with the Roster Cut clothesline to win.

The legendary Jazz, who recently retired from in-ring competition, accompanies Jordynne Grace and Rachael Ellering to ringside. Rachael kicks Kiera into a powerful sidewalk slam from Jordynne. Tasha interferes from the apron before joining Kiera for a double suplex on Jordynne. Kiera gets a running start for her signature dropkick to Jordynne in the corner. Jordynne ducks, causing Kiera to hit her own partner. The separation allows Jordynne to tag in Rachael, who goes on the attack. Rachael hits a springboard legdrop for two. Fire ‘N Flava hit stereo top rope dropkicks for a pair of near falls. Tasha goes over the top and hits Rachael with a modified cutter on the apron. Kiera soars through the air with a top rope crossbody to the floor. Rachael counters Kiera’s spinning neckbreaker into a sit-down powerbomb to win. Jordynne Grace and Rachael Ellering are the new Knockouts Tag Team Champions!

The only way to win this match with no disqualifications and no countouts is to incapacitate your opponent to the point where they are unable to answer the referee’s 10 count. Moments after the opening bell, Callihan hurls Trey over the top rope to the floor. Trey builds momentum with Sliced Bread, followed by a Hurricanrana on the outside. Trey crashes and burns on a dive, causing him to collide with the steel guardrail. Callihan jabs a wrench into the mouth of Trey but he gets to his feet at the count of 8. Back in the ring, Callihan bends him over backwards with a sickening bodyslam onto the legs of a table. Trey is perched on the top but Callihan throws a chair at his head. Callihan connects with a top rope piledriver into a table. Callihan goes low before spiking Trey with a piledriver onto the steel steps. Callihan traps Trey underneath the steps but Trey escapes underneath the ring. Trey reemerges and sends Callihan crashing through a table with a cutter. Trey gets to his feet before the count of 10 and Callihan does not – Trey Miguel is the Last Man Standing!

Gia Miller catches up with IMPACT World Champion Rich Swann as the historic Title vs. Title match against AEW World Champion Kenny Omega draws near. Swann sends one final message to Omega, stating that he has the homefield advantage tonight.

FinJuice are back from their tour in New Japan Pro Wrestling to defend the World Tag Team Titles against the former champions, The Good Brothers. Juice powerslams his own partner onto the chest of Anderson. Gallows delivers a pump -kick to Finlay while Anderson distracts the referee. Gallows hits a pinpoint kick to Finlay’s head. The Good Brothers cut off the ring and wear Finlay down, preventing him from making the tag. Finlay creates separation with a spinning elbow off the second rope. Finlay counters a suplex from Anderson and dives for the tag. Juice quickens the pace as he hits a springboard crossbody to Gallows on the floor. Juice crashes into Anderson with a running cannonball for two. Gallows pushes Finlay off the top to prevent the Doomsday Device. Finlay breaks up a Magic Killer attempt. Juice rolls up Gallows to score the victory and retain the World Tag Team Championships!

Don Callis denies Gia Miller an interview with AEW World Champion Kenny Omega. Instead, Callis reiterates his vision that he claims will come to fruition tonight when Omega defeats Swann for the IMPACT World Title.

Deonna goes for the Fujiwara Armbar in the early going but Tenille counters with a hanging neckbreaker, followed by multiple quick pin attempts. Deonna wears Tenille down with a straightjacket submission. Tenille fights out of it as both Knockouts exchange running strikes. Tenille hits a big running clothesline and we’re at a stalemate. Tenille locks in the Tarantula, breaking before the referee’s five count. Tenille connects with a top rope crossbody for a very close near fall. Tenille sends Deonna crashing into the corner turnbuckles with a double underhook suplex, followed by her signature running crossbody. Kimber and Susan get up on the apron to break a submission attempt from Tenille. Kaleb With a K gets involved but Kimber drives him into the steel ring post. Tenille has the champ beat after the Spotlight Kick but Kimber and Susan pull her off the pin. Deonna connects with the Queen’s Gambit to retain the Knockouts Title.

After the match, Deonna, Kimber and Susan continue the assault on Tenille until Taylor Wilde makes her return to make the save! Taylor takes out Kimber and Susan as Deonna retreats up the ramp.

Our world changes again at Slammiversary, LIVE this July on Pay-Per-View!

Legendary play-by-play commentator Mauro Ranallo joins D’Lo Brown and Matt Striker at the announce desk for his historic match. Two referees will officiate the bout, IMPACT’s Brian Hebner and AEW’s Aubrey Edwards. Tony Khan, Tony Schiavone and Jerry Lynn watch on from the other side of the guardrail. Omega plays mind games in the opening moments of the match as he slaps Swann across the face. Swann returns the favor, then dropkicks Omega to the outside. Swann dives from the top rope to the floor with a modified Phoenix Splash. Omega turns the tide when he gets his knees up on a rolling from splash attempt. Omega hits a buckle bomb, then drives Swann head-first into his knee for a series of two counts. Omega targets the lower back with a pendulum backbreaker. Swann explodes, successfully hitting a frog splash for a very close near fall. Swann connects with another frog splash, this time from the top rope. Omega hits a superkick, followed by a spinning sit-out powerbomb for yet another two count. Omega hits the V-Trigger but Swann counters the follow-up One-Winged Angel attempt. Omega can’t connect with a top rope V-Trigger as Swann escapes with a sunset flip powerbomb. Omega turns his attention to the neck of Swann with a pair of snap dragon suplexes. Omega uses referee Brian Hebner as a shield to avoid a handspring cutter from Swann. Aubrey Edwards takes over as she stops Omega from using a steel chair. Swann hits the handspring cutter but Omega counters into a pin attempt of his own. Omega pulls down his kneepad before hitting multiple V-Triggers. Swann misses the Phoenix Splash, allowing Omega to deliver one final V-Trigger, followed by the One-Winged Angel to win. Kenny Omega is the new IMPACT World Champion.

Omega stands tall with both the IMPACT and AEW World Titles held high as Rebellion goes off the air.