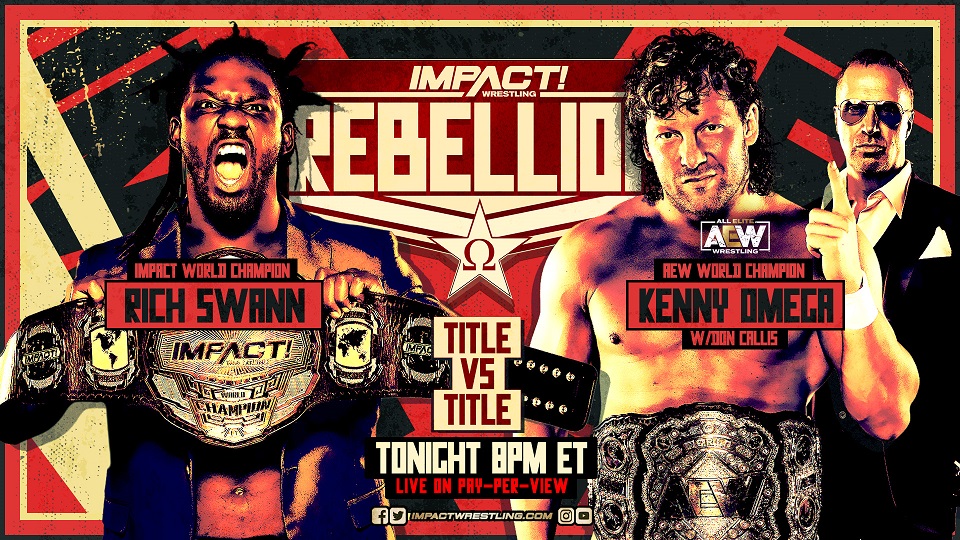 A historic first, a battle between two champions, a war between two competing worlds. Rebellion goes down LIVE tonight at 8pm ET on PPV!

IMPACT Wrestling executive Scott D’Amore made a pair of rapid-fire announcements March 9th on IMPACT! on AXS TV that sent shockwaves around the wrestling world. D’Amore informed the bitter rivals, Rich Swann and Moose, their main event at Sacrifice would not only unify the IMPACT and TNA World Championships – but the winner would go on to face All Elite Wrestling World Champion Kenny Omega in a mind-blowing Title vs. Title fight at Rebellion on April 25th. At Sacrifice, Rich Swann defeated Moose in a jaw-dropping encounter to become the new IMPACT Wrestling Unified World Champion. With that victory, the historic Title vs Title match against AEW World Champion Kenny Omega was made official!

New IMPACT World Tag Team Champions, FinJuice, were confronted by former titleholders, The Good Brothers, just days after winning the gold at Sacrifice on IMPACT Plus. Doc Gallows and Karl Anderson claimed that they were not adequately prepared for their title defense and demanded a rematch against the duo from New Japan Pro Wrestling. As they strive to be fighting champions, David Finlay and Juice Robinson had no issue granting The Good Brothers their rematch – but it will have to wait until April 25th at Rebellion as FinJuice first head back to NJPW with the IMPACT World Tag Team Titles around their waists!

After defeating Havok, Rosemary, Jordynne Grace, Alisha and the returning Su Yung in a chaotic #1 Contender Knockouts Weapons match at Hardcore Justice, Tenille Dashwood has earned a shot at the Knockouts Championship. Tenille will challenge reigning champ Deonna Purrazzo who ended the career of the legendary Jazz on the same night. Will Tenille prove that it’s all about her by winning the Knockouts Title or will the Age of the Virtuosa continue? Find out at Rebellion!

X-Division Champion Ace Austin has his work cut out for him when he defends the title against TJP and Josh Alexander in a huge 3-way match! After several weeks of TJP and Alexander jockeying for position in the stacked X-Division, both competitors have found themselves worthy of a title shot. Who will leave Rebellion with the X-Division Title around their waist when three of the most athletic stars in IMPACT collide?

Former best friends and tag team partners will explode when Brian Myers goes one-on-one with Matt Cardona! After Myers accused Cardona of following him to IMPACT in an effort to steal his spotlight, Cardona was quick to shut him down. Cardona laid out a challenge but Myers did not hesitate to decline. However, the cunning Myers was just waiting for the opportune time to strike as he brutally attacked Cardona during his match against Jake Something, moments before accepting the challenge for Rebellion!

For months, Sami Callihan has claimed that Trey Miguel doesn’t have the “passion” to be a successful star in IMPACT Wrestling. In turn, Callihan offered to mentor Trey – something that he wanted no part of. The heinous Callihan would go on to target close friends of Trey’s, culminating in a vicious attack on his wrestling teacher and training partners. Most recently, Callihan brutally attacked him with a steel chair – but Trey’s unrelenting determination would not allow him to stay down. Now the two rivals are set to collide in a Last Man Standing match at Rebellion. The only way to win this match with no disqualifications and no countouts is to do enough damage so that your opponent is unable to answer the referee’s count of 10!

Violent By Design sent a dominant message when they defeated Eddie Edwards, Willie Mack, IMPACT World Champion Rich Swann and Trey Miguel in Hardcore War – but they didn’t finish the job. Just days later on IMPACT!, Eddie Edwards and Willie Mack called out VBD once again and this time, they had backup from James Storm and Chris Sabin. With vengeance on his mind after VBD attacked IMPACT veteran Chris Harris, Storm led the attack and sent Violent By Design retreating. What will happen when these two squads collide in an 8-man tag team match at Rebellion?

After Fire ‘N Flava disrespectfully interrupted the retirement ceremony of the legendary Jazz,  Jordynne Grace and Jazz defeated the Knockouts Tag Team Champions in a non-title match. Scott D’Amore granted them a title opportunity at Rebellion but Jazz stuck to her word and remained in retirement. However, Jazz offered to find Jordynne a suitable replacement. On the final IMPACT! before Rebellion, second-generation star Rachael Ellering was revealed as Jordynne’s partner when she came to her aid during a 2-on-1 beatdown from Fire ‘N Flava! Do these two Knockouts have what it takes to dethrone Kiera Hogan and Tasha Steelz from atop the Knockouts tag team division?

In news sure to stun and excite hardcore wrestling fans around the world, IMPACT Wrestling is proud to announce legendary play-by-play commentator Mauro Ranallo will be part of its broadcast team for the Rebellion Pay-Per-View. On Sunday, April 25, Ranallo returns to his first love to call the epic collision between IMPACT champion Rich Swann and AEW champion Kenny Omega!