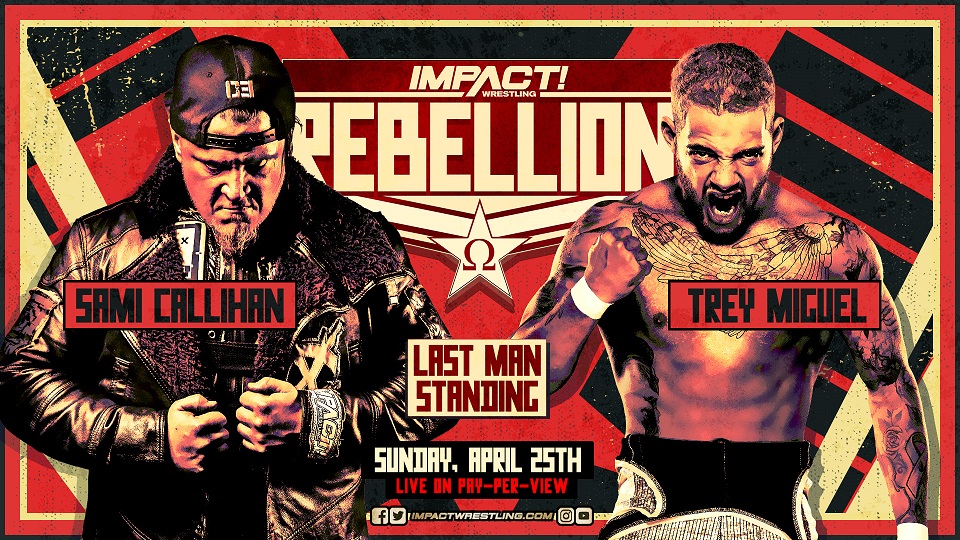 In addition to the already-stacked lineup, two new matches have been announced for Rebellion, LIVE Sunday, April 25th on Pay-Per-View!

For months, Sami Callihan has claimed that Trey Miguel doesn’t have the “passion” to be a successful star in IMPACT Wrestling. In turn, Callihan offered to mentor Trey – something that he wanted no part of. The heinous Callihan would go on to target close friends of Trey’s, culminating in a vicious attack on his wrestling teacher and training partners. Most recently, Callihan brutally attacked him with a steel chair – but Trey’s unrelenting determination would not allow him to stay down. Now the two rivals are set to collide in a Last Man Standing match at Rebellion. The only way to win this match with no disqualifications and no countouts is to do enough damage so that your opponent is unable to answer the referee’s count of 10!

Violent By Design sent a dominant message when they defeated Eddie Edwards, Willie Mack, IMPACT World Champion Rich Swann and Trey Miguel in Hardcore War – but they didn’t finish the job. Just days later on IMPACT!, Eddie Edwards and Willie Mack called out VBD once again and this time, they had backup from James Storm and Chris Sabin. With vengeance on his mind after VBD attacked IMPACT veteran Chris Harris, Storm led the attack and sent Violent By Design retreating. What will happen when these two squads collide in an 8-man tag team match at Rebellion?